The war with Sultan Shahanshah 1110-16: Backround 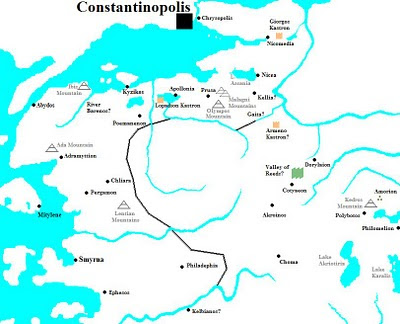 Trying to decipher what Anna Comnena wrote is like a 'Gordion Knot'.
She often repeats about events, yet makes it look as if they happen at different times.
Personae can have two or more names, such as Sultan 'Klizaslan/Saisan'. Here Anna has garbled the identity of Sultan Kilij Arslan and his son, Shahanshah.
She never reffers to Shahanshah by name, but confusingly calls him 'Malik-Shah' who had been the Sultan of Persia but by 1110 had been dead for 18 years.
Gumush-Tegin II (Danishmend) is never mentioned, though he was very active at this time, attacking the empire either on his own or in alliance with the Sultan of Rum.
There was rivalry between these two Turkish states, and Gumush took in Masud, the brother of Shahanshah and fostered a bitter rivalry between them that culminated in the death of Shahanshah at Konya in 1116.
Various names pop up in Anna's narrative. She mentions an 'Arch-Satrap Manalugh, who in age, bravery and experiance surpassed all the Turks in Asia'.
Apart from Emir Ridwan of Aleppo and Sultan Ghiyath ad-Din of Persia, Gumush-Tegin would more likely be this 'Manalugh'.
Other names mentioned are a 'Emir Mehmet' and 'Kontogmen' who launch an invasion across the Lentian mountains.
This Emir might have formally ruled Ephesos, before the city was retaken by the Caesar John Ducas in the campaign of 1097.
Kontogmen sounds more of a Greek name, like Kontostephanos.
Anna might just have Hellenised the name of a Turk, or he might have been a Byzantine renegade.
In place names and of towns and cities, Anna tends to be hazy, for example when she writes of 'analugh crossing the 'river Barenus near Mount Ibis' to attack the city of Abydos on the Hellespont.
A mountain that had up till then never been written about, nor a river of that name.
Posted by Masis at 03:34 No comments: