Whilst I was researching about king Sargon II of Assyria (reigned 722 - 705 BC) and his campaign against the Cimmerian horde in Asia Minor I came across this image, from his palace of Dur-Sharrukin, of Cimmerian horse archers firing back at the pursuing Assyrian cavalry. 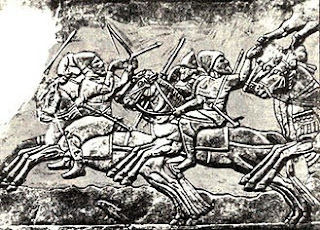 What is the big deal about this image? Well, it is established wisdom that this horse-archery technique originated with the Parthians and was used to the full by a Parthian army of 10,000 strong against 43,000 strong Roman army led by the greedy Marcus Licinius Crassus near the town of Carrhae, northern Syria, in 53 BC. Not only did the battle result in 20,000 Roman dead and 10,000 Roman captured (some sent to central Asia) but also the horse archer technique of firing back upon pursuing foes to become a nightmare in the unconcious mind of future Roman armies deployed to the Parthian frontier.

Clearly this horse-archery technique predates the Parthians. Who the Cimmerians were is still a mystery, yet they were foes of the Scythians, who chased them across the Caucasus.

The Parthians Arsacid dynasty is supposed to have risen from the Dahae tribe that lived to the east of the Caspian sea, no explanation is given for what distinguished them from the neighbouring Scythian tribes to their south in Parthia. The Dahae then invaded or intervened in Parthia in 238 BC, killing its king, Andragoras and taking over the region. From then on they would be known only as Parthians, and their dynasty, the Arsacid.

Whether all the Cimmerians went west into Asia Minor seems unlikely, and some may have been driven eastwards, still pursued by their Scythian foes, and the Dahae may descend from these Cimmerians.

In conclusion we can not longer honestly credit Parthia with this horse-archery technique, and must now give it to its inventors, the Cimmerians ;)