When I was in Armenia, I went to see the 4th century AD Basilica Church of "Surp Nshan" (Holy Seal) near Abaran.
Outside in the courtyard are some ruins, one of which caught my eye. It had a Cross inside a circle, and itself looked like a banner used in battle as it was upon a pole. At either side was a person, eroded away, yet still visible. 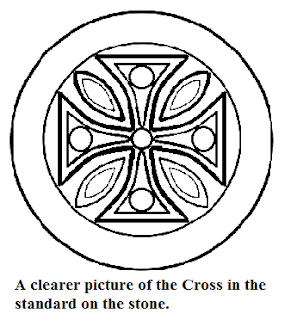 This looked like a battle standard, most likely used either by the Arshakuni kings of the 4th century or the Bdeshk families such as the Kamsarakan or Mamikonian.


Back in London I began to read about the Achaemenid empire, and came across a rendition of a motif from the tunic worn by King Darius I at Persepolis. 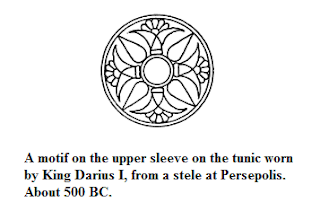 I also saw two coins minted by the Satrapy of Caria around 395 BC and 344 BC, and drew the motifs on their Reverse sides.. 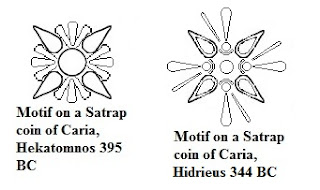 I then learned about the "Pazyryk" carpet from a tomb in the Altai mountains, that is dated to around 400 BC, originating from Achaemenid Iran. It bears many examples of the "Drafsh" motif. 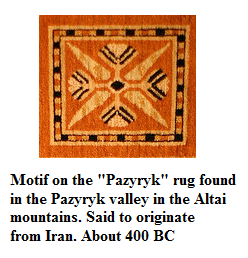 I also began to read about the Sassanian era, and the "Drafsh" of Kaveh, perfectly depicted on the reverse of this coin from around 100 BC of the ruler of Persis, Artaxerxes.
The Star motif was also used by the dynasty that ruled Pontus from 302 - 37 BC, among whom were king Mithridates VI. His ally and son-in-law was king Tigran II of Armenia, and below is my illustration of the motif used on his crown.

Reading Dr. Kaveh Farrokh's book "Shadows In The Desert" I saw a photo of what is called the "Cup of Khosrow" and I noticed the "Drafsh" motifs which decorated it. I drew an example of one of them. 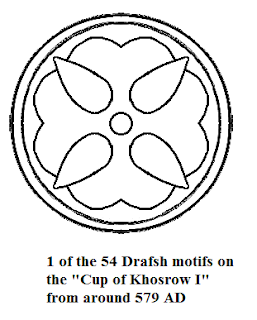 On further reading of "Shadows In The Desert" I saw a photo of a fresco from the palace of an Ummayad Caliph, near ancient Palmyra. Called the "Qasr Al-Heir El Gharbi" the paintings have a border of "Drafsh" running around them. 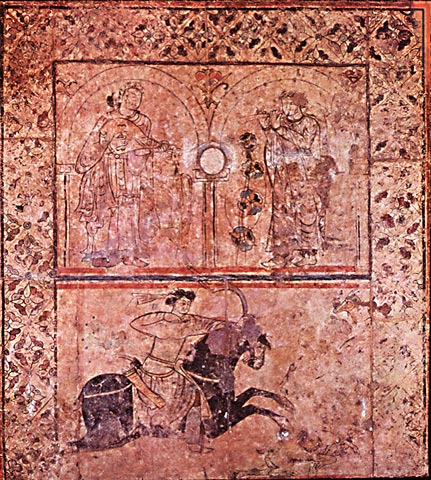 Below is my drawing of one of them. 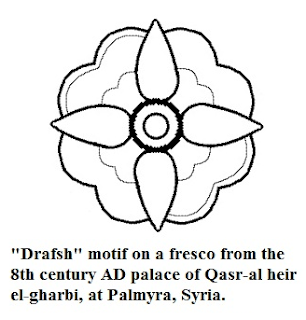 On further reading I learnt that the "winged emblem of Zoroaster" had been in use before by the Assyrians.
Below is my drawing of a star motif on a stele from the reign of king Ashurbanipal II, circa 850 BC. 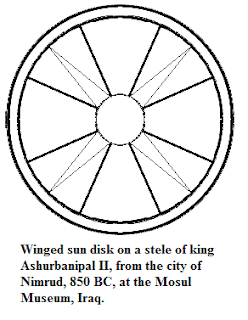 This Star motif went back further, I saw a photo of a boundary stone from the reign of king Meli-Shipak II of Babylon, circa 1186 BC which had the star on it. What can be surmised is that this star motif had a deep meaning in the successive dynasties of Mesopotamia, what it's exact representation is though, is another question.
Posted by Masis at 19:44