The Paulicians: A timeline & map

Ten years ago I read about the Paulician sect, I decided the read about them again and draw a timeline of their "rise and fall" and also to make a map that will help understand where they were based and their activity.
Below is the timeline of events. 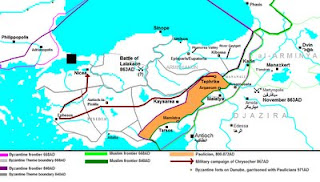