The Fire Temples from the Sassanian Occupation of Egypt and Cappadocia

I couple of years ago I chanced to come across an image of what is described as a "mosque" in the city of Kayseri, Turkey.
Kayseri was originally called Caesarea, it was the capital of region of Cappadocia and by the 4th century AD it was the main centre of Christianity in all of Anatolia.

In 615 AD General Shahin invaded Anatolia for the Shah of Persia, Khosrow II.

This "mosque" look nothing like a conventional mosque, it has no mineret, the area for prayer is not at ground level but on the 1st floor. The structure is cube shaped and has 4 doorways, 1 on each side. 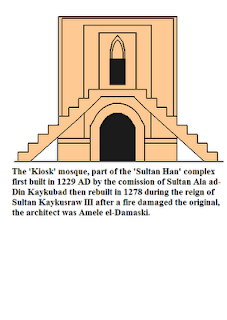 General Shahrbaraz invaded Egypt in 616 AD for the Shah of Persia, Khosrow II.
In 868 AD General Ahmad Ibn Tulun invaded Egypt for the Abbassid Caliph of Islam. He soon made himself independent of the Caliph, and created a city called Al-Qatta'i.
He also had a mosque built, in the centre of which is called an "ablution fountain". The structure is cube shaped and has 4 doorways, 1 on each side. 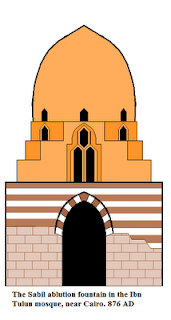 Compare with my drawing of the Fire Temple at Firuzabad in Fars province, Iran, that dates back to around 224 AD. 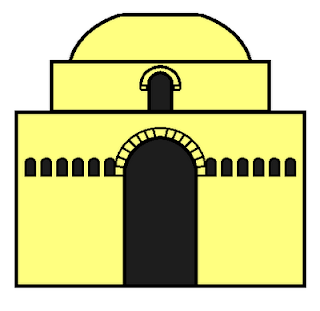 It is my belief that when Cappadocia and Egypt came under Persian control in 615 AD and 616 AD respectively, Fire Temples, along with a religious complex or military barracks were built either in their capitals, such as Caesarea or near the military base of "Fort Babylon" in Egypt, which later became Fustat.

When Cappadocia, and its city Caesarea, were recaptured in 624 AD by Emperor Heraclius and the reoccupation of Egypt by 628 AD these Persian structures would have been pulled down. The ruins of which could have been rebuilt later on by new conquerors, such as the Seljuk Turks in Anatolia and the Turkish dynasty of Ahmad Ibn Tulun. Persian culture was very influencial on successive Turkish dynasties, did they knowingly seek out these ruins from Persia's glorious past or was it mere coincedence?